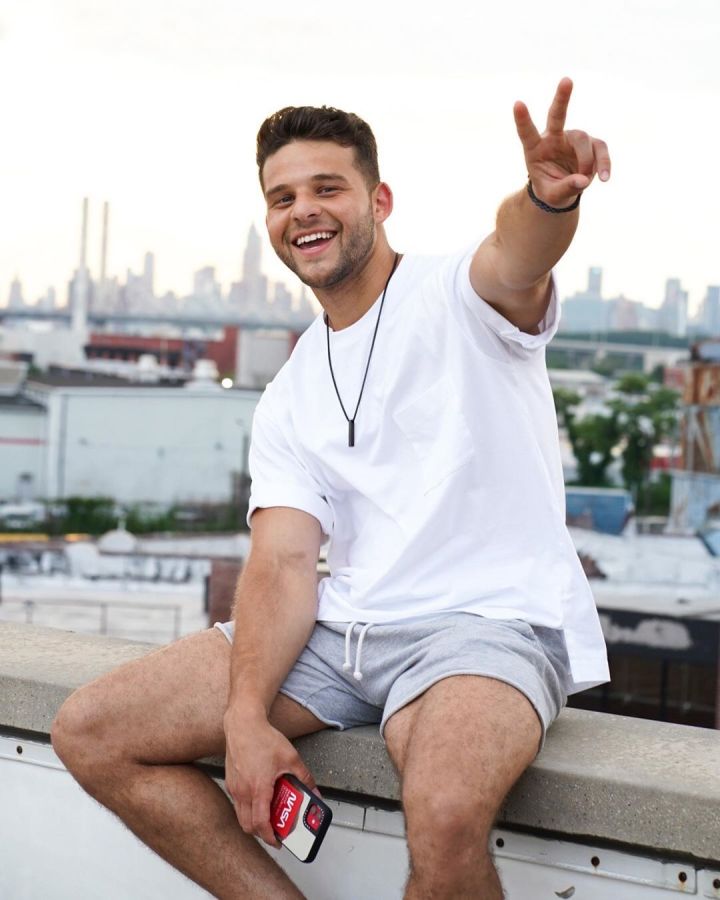 Josh Riquelme, 25, is from upstate New York. He became a represented male model, with BMG Models, in 2019. (Instagram) In June 2022, Josh moved to San Diego, California. Josh currently is a content creator for his social media channels. He is a Gemini, with a birthday on May 28.

A YouTuber, Josh has begun to add more content to his channel (lifestyle and fitness tips). [Be sure to subscribe.]

In 2021, Josh went to the Dominican Republic to visit his dad.

Josh has had a number of photo shoots with several photographers. Josh worked with one photographer, Carlos “Trey” Salazar, on a job for Box Menswear and continued to work with him to add photos to his portfolio.

(In 2019, Josh worked with another model, Kyle Hynick, in New York and Texas (for Box Menswear). In 2022, Kyle, Josh, and Vince Aldiere had a photo shoot in Tulum, Mexico.)

On October 11, 2022, Josh announced that he will appear on a U.S. television program on the MTV network titled “Love at First Lie.”

Sadly, Josh and Monica were voted off. They spoke about their experience on the show in an interview with In Touch Weekly.

In December 2021, Josh announced his workout-related website, The Riquelme Routine. He is selling an illustrated fitness e-book.

Josh also posts fitness and lifestyle content on his YouTube channel. One video provides five tips for incorporating into your morning routine.

The Five Habits for The Morning

Josh created a video on how to maintain a neatly trimmed beard. Josh also provided tips on how to avoid razor bumps. Given that more guys like having facial hair, his tips have been popular.

Josh traveled to Houston, Texas. He got in some training time at Christian Guzman‘s gym.

In addition, he had his hair dyed blonde. (Hair stylist, Keon Cruz.)

Eduardo Fermin is a photographer based in New York City. He and Josh have created outstanding images.

Carlos “Trey” Salazar is an Austin, Texas, based photographer. (I have a post on Trey on the blog.). Josh has worked to create images multiple times, at a photo shoot for Box Menswear (discussed below), and then other times when Josh went to Texas.

When Josh went to Texas, he had a photo shoot with Houston, Texas, based Photographer Anh Nguyen Henry.

Josh in July 2020, visited a beach in Asbury Park, New Jersey, and had some photos taken.

Josh did a photo shoot with Photographer Lester Villarama of Shot by Lester. Josh wore an awesome olive-brown overcoat.

Josh had a photo shoot with Photographer Peter Rock of Rock Photo.

In a previous photo shoot, Josh had trimmed facial hair.

When Josh went to Los Angeles, California, he did a photoshoot with Photographer Mark Aquino.

Through an Internet search, I found some photos from a shoot that Josh did in 2016 with Photographer Allan Spiers.

Josh showed his fresh, new haircut on his Instagram page (August 2020). The new haircut style is shorter than previous hair styles, with a fade on the sides.

Josh is a gaming PC enthusiast. He has some unboxing videos on YouTube.

Josh competed in a mens physique contest while a teenager. He covered his contest preparation on his YouTube account in 2016.

Josh prepared for a contest just after he graduated high school. He was 19 and a social media marketing coordinator. He started a video log to show his progress as he got into contest shape.

While doing the contest preparation, Josh also did a photoshoot with lifestyle shots.

Josh did a video with his bodybuilder friend, Adonis Grahovic.

Separately, during this period, there was a video of Josh trying on clothing from the Beyond Genetics brand.

Josh has a YouTube video showing his progression from the start of his contest preparation through his final contest shape.

Josh ultimately earned his pro card at his contest. Josh states on his website that, in 2016, he became a pro in mens physique in the World Natural Bodybuilding Federation (WNBF).

After the YouTube videos covering this contest, there were no updates to the channel until mid-2019. Josh prepared a video explaining what had happened in an update video.

Josh discussed his observations about his journey through depression and after depression on an Instagram page.

Several of the newer videos were about Josh demonstrating the workouts he performs to develop and maintain his physique. Unlike other videos with muscular fitness models, Josh also shows his personality in the videos.

This helps the viewer see the person who is a fitness model as well as gaining workout inspiration. This is in line with the level of disclosure Josh showed in discussing his bout with depression.

From starting with gym training, to competing in mens physique and building his social media pages, especially Instagram and YouTube, and finally becoming a male model, Josh appears to be moving up in the fitness model industry. In addition, he appears to be a personable and friendly guy, that side comes through on his video logs.

Support Josh by following him on his social media channels, including subscribing to his YouTube profile.

I wish him continued success. 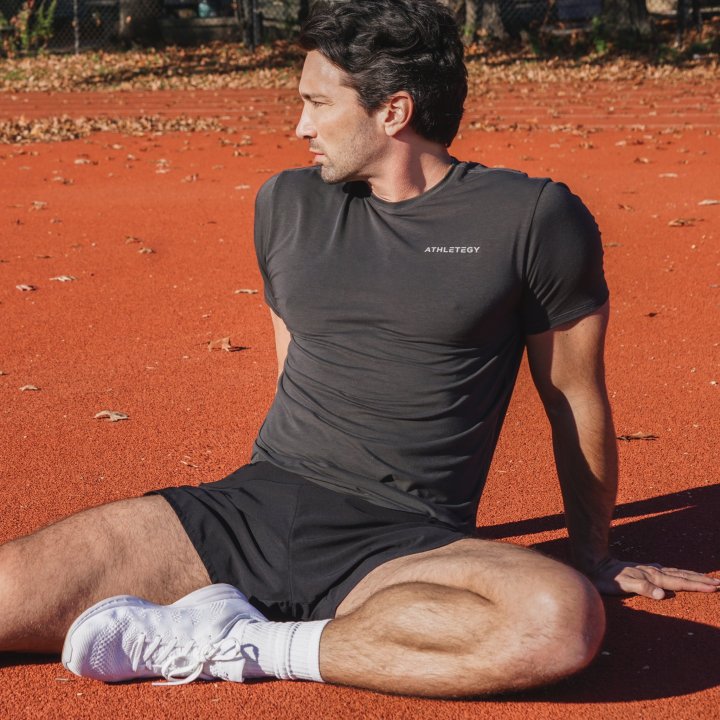 Introduction: The Struggle and Benefits of Leg Day

The legs are a large muscle group. It takes focus, dedication, and time to add size. The effort produces impressive results, as seen with some examples in this section.

This blog will describe some shorts that will allow you to maintain your focus on the important leg training day.

Read below for leg-day training information so that you can build your own tree-trunk thighs.

Andrew Morrill and Michael Tedesco created the Athletegy brand “with the goal of combining high-quality gymwear with a style and fit they felt was missing from the market.” The brand is based in New York City.

The quad short is designed in New York and manufactured in China.

Read more of my review on the quad short in a separate blog post.

The premium lift shorts are marketed for leg day but they could be used for a cardio session or just relaxing at home as well. The fabric composition is 94 percent polyester and 6 percent spandex. The shorts are made in China.

I selected the XL size (orange bolt color). It is hard to find the size guide. I have found sometimes that sizes for clothes from Australia can be on the smaller side. After an Internet search, I found the size guide.

I ordered the shorts (before the COVID-19 pandemic) from the US-based website. (The shorts still are shipped from Australia using Australia Post.) At the time I ordered, I was offered a deal to add socks for 10 US dollars and I accepted that.

I had no issues with the shipping before the pandemic. During the pandemic, international mail is affected as flights are being disrupted for the moment.

The shorts arrived in a large mailing envelope. Inside, the shorts were in a plastic bag and the sock was in plastic in the same envelope.

The lift shorts have a liner. It is the wearer’s preference to wear the shorts with or without underwear. The shorts fit great and I used them for an at-home HIIT workout and weight-training session.

The length of the shorts was perfect for HIIT training with lots of exercises similar to what was done in my physical education classes in the United States (mountain climbers, burpees, jumping jacks, and so on). The shorts were perfect with the weight-training portion of my routine as well.

I am very happy with the lift shorts. I will order another pair.

According to the label on the shorts, the shorts can be machine washed with warm water (no bleach) and tumble dry low, removing promptly from the dryer.

Stay Shredded, based in Australia, makes shorts designed for leg day. The shorts, named quads for the gods lifting shorts, have a lining like swimwear and a short length (mid-thigh) to allow the flexibility for leg exercises, like squats and deadlifts.

The website states that the fabric composition of the shorts is polyester and cotton. See the website for the size chart for the shorts.

When I tried them on they felt a bit tight around the hips but overall there was good support and flexibility.

I did a workout with them, particularly high-rep squats and walking lunges. The shorts worked well for both the exercises. Going deep with the squats was no problem with these shorts.

They have quickly become one of my favorite shorts for leg day.

The lifting shorts have cotton in them. Cotton, the company explains, can shrink in the first wash, if the shorts are not washed correctly.

Thus, Stay Shredded recommends washing the shorts by hand in cold water or dry clean only.

For drying, the company recommends drying on a flat surface or hanging on a clothing hanger.

The company, 2Eros, is based in Australia. The shorts, S01 Icon shorts, have a mesh brief, are mid-thigh. The shorts are designed for swimwear as well as working out, according to the description on the website. A physique enthusiast named Aziz Sergeyevich Shavershian (1989-2011), also known as Zyzz, used to wear these shorts in his social media posts.

The fabric for the shorts is 100 percent polyester and the mesh brief is made of polyester Elastane. A potential issue is that the shorts tend to be small. Check out the 2Eros size chart before buying.

I enjoy training legs in the gym. The legs happen to be a big muscle group and I love to do squats, walking lunges, and deadlifts. Many shorts are too long and interfere with leg-exercise form. (See another article about Crossfit shorts for men.)

Perhaps, some guys have great leg development and are physique or bodybuilding or are workout enthusiasts who are concerned about muscle size and development. These guys might want to see the legs working while they exercise. (In general, short shorts seem to be making a comeback.)

Why Leg Day is Important

What is Leg Day?

For fitness enthusiasts or people just starting out with weight training, leg day is the day that exercises for the legs (quadriceps, hamstrings, and calves) are done.

Some people train legs more than one time per week following a full-body training routine. Others do a body-part split training routine. The all parts of the legs could be worked on the same day or the quads, hams, and calves are trained on different days.

The legs, especially the quads and hams are huge muscle groups that carry our bodyweight everyday. Because of this the legs can handle a lot of weight and be exhausting to train. The reward is well-toned legs.

I typically focus on the barbell squat and deadlift for leg day. I have found that shorts that do not get in the way on the movement are better.

Leg day is much talked about because the legs are such a large muscle group that takes effort and energy to train. The benefits of having well-conditioned legs makes the effort worth it.

The shorts (in this post) that have been designed for leg day have worked well. The high quality of the Strong Lift Wear shorts impressed me.