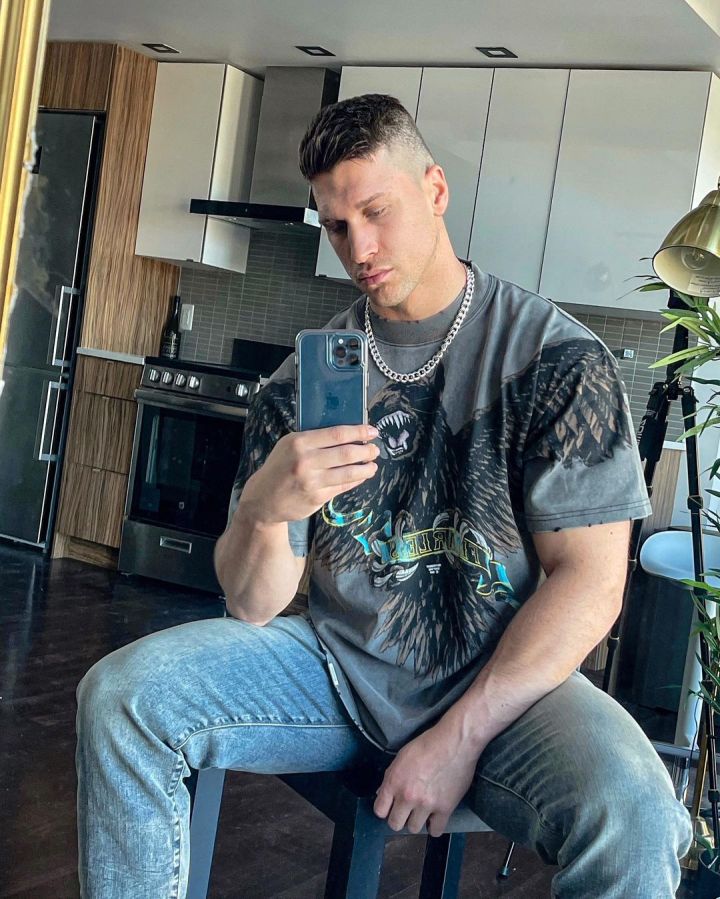 I first saw Kyle Hynick, a mens physique competitor and fitness model from Halifax, Nova Scotia, Canada, when he did a photoshoot for Box Menswear in New York. (Note: Fellow model Josh Riquelme was at the same photoshoot.)

According to his portfolio page at his modeling agency, City Models, Kyle is 6 feet (1.83 meters) tall with a 31 inch (78.7 cm) waist. Kyle also has a page at Model Mayhem.

Along with fitness influencer physique and workout photos, Kyle also has an Instagram page where he models street wear, including the grunge style.

The grunge style includes flannel overshirts (including some with customized embroidery), graphic tees, and distressed jeans or cargo pants. It is a rugged, relaxed look, which looks great on him.

When Kyle posted these photos on Instagram, I thought they were a photomontage. (No one in the crowds of people is looking at him.) Nevertheless, the 2019 photos are really in Times Square, New York City. Someone who saw him there wrote a comment. The photographer is Jade Young.

Author’s note: Some of Kyle’s photos with Jade were featured in DNA Magazine.

In doing a search on YouTube, I found that Kyle had been a fitness YouTuber starting about 8 years ago. At the time, Kyle was focused more on bodybuilding. A transformation video received 2.3 million views in 2013, according to an interview of Kyle in a Canadian newspaper.

In mens physique, the contestants wear board shorts and do semi-flexed body poses. The emphasis is on overall physique not muscularity. The categories are determined by height only; there are no weight classes.

According to the Canadian Physique Alliance, contestants are rated on the following criteria:

In classic physique, the classes are based on height and weight.

There are five mandatory poses:

In bodybuilding is based on muscularity. There are specific flexing poses, and the classes are based on weight. Competitors wear posing briefs.

Bodybuilding poses are the following:

Kyle had some photos from the contest period.

In early 2019, Kyle was in New York for a photo shoot for Box Menswear, with Photographer Jade Young. Also, at that photo shoot was New York-based model Josh Riquelme. In July 2020, DNA Magazine featured some of the images from Kyle’s photo shoot with Jade.

In November 2020, Kyle was featured in an advertorial in Attitude Magazine for Box.

Later in 2019, Kyle was in Texas for the 2019 Box Menswear photo shoot. (Josh Riquelme was also at this photoshoot.)

Kyle also had a photo shoot with Canadian photography studio, Phantasma Photography. Some photos from one photo shoot were featured in DNA Magazine.

In July 2020, Kyle traveled to Puerto Rico for a photo shoot with Photographer Michael A. Downs.

In early 2020, before the outbreak of the COVID-19 Coronavirus pandemic, Kyle went to Miami, Florida for a photoshoot with Michael.

Kyle got some great images while he was in Florida.

While Kyle was in Miami, he also did a photoshoot with Photographer Luis Rafael. Again, Kyle created amazing images with his photographer.

While Kyle was in Miami, he also did a photoshoot with Photographer Mark Jenkins.

While in Florida, Kyle did a photo shoot with Photographer Steven Schmidt. Photographer Schmidt mentioned that Seth Holbrook connected him with Kyle. I have noticed how the models from the Box Menswear photo shoot in Texas have supported each other.

In addition, Kyle worked with Photographer Stevan Reyes in Florida.

Kyle has been involved in fitness and modeling for many years. He had a great physique foundation to build upon to achieve his current physique.

I look forward to continuing to seeing more of Kyle’s work.

This site uses Akismet to reduce spam. Learn how your comment data is processed.

For questions about brand or model promotion, email me at info@menswearnews.com.