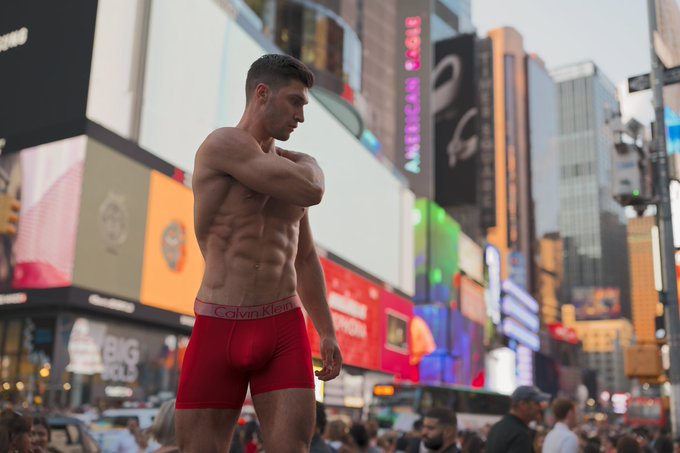 The Influence of CK on Underwear Advertising and Social Media Influencers

Note: This story is based on observations in a pre-pandemic New York City. May we recover from this pandemic experience, so that we will be able to scale back up with deliberate care–over time–to pre-pandemic levels.

One-time fitness model and personal trainer Kyle Hynick posted some photographs from his photoshoot with New York-based Photographer Jade Young seemingly in Times Square in New York City. The backdrop had people there who appeared not to be looking at a dude posing for photographs in his Calvin Klein underwear. The people essentially appeared to be fully engaged in doing tourist things. Initially, I thought that the background of Times Square was a creation of photo editing.

My thought was not correct. A commentator on Kyle’s photos stated that the commenter viewed Kyle’s photoshoot in person. I was immediately intrigued. Of course, physique competitors seek the limelight and can pose their well-trained and dieted physiques on stage in front of an audience. Posing a physique on a public stage is just a matter of scale.

I discovered that another model, Tyson Dayley, a WBFF pro fitness model, also had a photoshoot in Times Square. In his photos and video that he posted on Instagram, however, the people in the background also were taking photos of Tyson. People were sitting close by.

Times Square, Manhattan, New York City. What draws Photographer Jade Young there? Why a male in underwear appears to be an unsurprising sight? I did a quick Internet search on the history of Times Square to find out.

Times Square, a tourist destination and business area, was once home to adult films and gritty culture. There is a blog post on the history and transformation of Times Square at the Times Square District Management Association website.

In 1982, Calvin Klein had a billboard ad with Olympic athlete Tom Hintnaus in Times Square. The photographer was Bruce Weber. According to a New York Times article, the billboard ad stopped traffic.

Also in Times Square, is a guy who has made a lot of money walking around Times Square in cowboy boots and underwear, the “Naked Cowboy“. Freshpair’s National Underwear Day, August 5, had a runway show in Times Square.

When the Calvin Klein ads first appeared, high-speed Internet or social media sites did not exist. But that history seems to have had some influence on fitness models and influencers, who often feature underwear or men’s clothing brands in their social media posts.

In addition, there are more underwear brands in the market. Still, Calvin Klein, now part of PVH Corporation, remains a strong market player in underwear.

Jade Young now also takes photoshoots in Times Square with men in underwear in person rather than in a billboard photograph. I think the transition also humanizes the model as you could interact with the model and the photographer and perhaps even get an autograph. Formerly, you only could look up at a huge billboard ad.

Hallenbeck captured images of Sandell posing around Manhattan in a pair of Calvin Klein boxer briefs.

When I looked at Jade Young’s photos of models in Times Square, I did not expect that it would lead to a blog post. But the notion of posing in public so openly was an attention grabber. When doing research and finding articles that traced a story, my old journalistic love for a story was reawakened. I could not resist.

How interesting that a Calvin Klein ad pushed the mainstream culture forward as well as developed many new underwear brands. Despite that, Calvin Klein remains a market force.

If you notice any Instagram posts with other fitness models in Times Square, please leave a comment with the link.